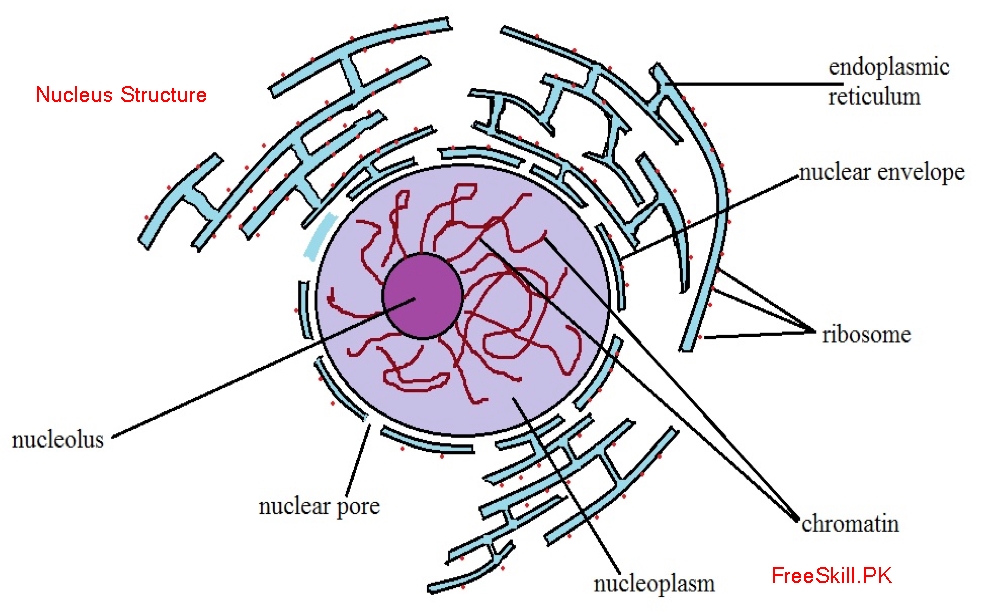 The nucleus is a membrane-bound organ that contains the genetic material (DNA) of eukaryotes. In this way, it maintains cell integrity by facilitating transcription and replication processes.

It is the largest organelle of the cell, accounting for about one-tenth of the entire cell volume. This makes it one of the most easily identified organisms under the microscope.

Only appears in the non-segmented phase. In the non-dividing phase, It is composed of a chromatin network and a nucleoplasm. The nucleus disappears and the chromosomal content is replaced by chromosomes in dividing cells. Chemically, the nucleus is made up of DNA, RNA, and proteins (including enzymes). It consists of four parts: nuclear membrane, nucleolus, nucleoplasm, and chromosome.

As an organelle containing the cell’s genetic material, this can be called a command center. Therefore, the nucleus is composed of several structured elements that can make it work. This section focuses on the structure of the unit.

Typically, the nucleus has a spherical shape, as shown in most books. However, depending on the cell type, it may be flattened, oval, or irregular. For example, the nucleus of columnar epithelial cells looks longer than the other cells. However, the size of the nucleus may also change as the cell matures.

It performs the following functions:

The nuclear membrane is one aspect that distinguishes eukaryotic cells from prokaryotic cells. Eukaryotic cells have a nuclear-bound membrane, which is not the case for prokaryotes that lack membrane-bound organelles (such as bacteria).

There are nuclear holes (containing proteins) present on the nuclear membrane, through which substances enter or leave the cell (RNA, proteins, etc.). Although lipid billers are separated by a thin space (perinuclear pool), studies have shown that they fuse into the pores.

The nucleoplasm, also known as the nucleoplasm joint, is a protoplasm composed of enzymes, dissolved salts, and many organic molecules. In addition, the nucleoplasm helps buffer and therefore protects the nucleoli and chromosomes, while also helping to maintain the overall shape of the nucleus.