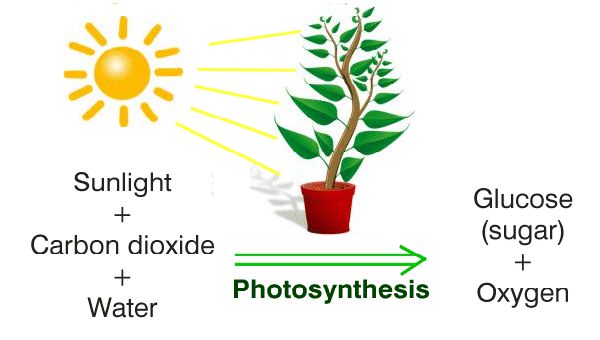 “Photosynthesis is a process in which the light energy of energy-depleting inorganic oxide compounds reduces carbon (CO2) and hydrogen (water) to energy-rich carbohydrates (sugar and glucose).” Chlorophyll and photosynthesis pigments convert light energy into the chemistry that can. The next process occurs in photosynthesis.

Carbon dioxide (CO2), water, and light are reactive materials for photosynthesis, while glucose and oxygen are the products of photosynthesis. Water is used as a reactor in some reactions and is released as a product in other reactions. So water appears on either side of the equation. Since there is no net production for H2O, the equation can be simplified as follows:

This is the exact opposite of the air-breathing equation. Photosynthesis uses breathing products, while respiration uses photosynthesis products.

Photosynthesis is the process of reduction. It is represented by the following simplified equation.

However, this is not an easy step. This is a complex process. This can be accomplished through a series of simple steps or reactions. The light reaction continues in two steps.

1.Light-dependent reactions (light reactions)
Light is used directly. Chlorophyll and other optical dye molecules absorb light energy. These dyes should be reduced and absorbed. They convert light energy into chemical energy. As a result of this energy transformation, NADPH2 (NADPH + H +) and ATP molecules are formed. ATP is a temporary energy storage complex. Stored Energy and H + are used for non-light interactions.

The oxygen released during photosynthesis comes from the water. It is an important source of oxygen in the atmosphere. Most organisms need this oxygen to breathe and collect energy.

The hypothesis of Van Neil

A hypothesis suggested that plants spray water. Water is the source of hydrogen. It releases oxygen as a byproduct. He made assumptions based on photosynthesis experiments in bacteria. These bacteria produce carbohydrates from carbon dioxide. But they will not release oxygen.

According to Neil’s assumption, water is the source of oxygen, not carbon dioxide. This assumption was later confirmed in the 1940s. Isotope trackers are used in biological research. Water and carbon dioxide containing the heavy oxygen isotope 18 were prepared in the laboratory. Two groups of green plants were formed.

Chloroplasts – The Sites of Photosynthesis in plants

All green parts of the plant contain chloroplasts. But the leaves are the main site for photosynthesis in most plants. The number of chloroplasts is very large. There are approximately one million chloroplasts per square millimeter of the leaf surface. Green chloroplasts are mainly found in the cells of leaf tissues. Each mesophyll contains around 20-100 chloroplasts.

The chloroplast contains a double film. Surrounds a thick liquid inside called a matrix. This matrix contains most of the photosynthetic enzymes. Another membrane system is suspended in the matrix. These membranes are called thylakoids. A thylakoid is a group of flat, tablet-shaped capsules that are attached to each other.

Chlorophyll and other pigments absorb light energy. This light energy is converted into chemical energy in the form of ATP and NADPH. These products are used to collect sugar in the chloroplast matrix of green.

Green chloroplasts are not found in prokaryotes. Instead, they do have stacked light films. These membranes act like thylakoids.

A tool called an optical spectrometer is used to measure the relative ability of different pigments to absorb different light. “A pigment that absorbs light at different wavelengths is called the absorption spectrum of the pigment.”

Thylakoid membranes contain different types of pigments. Chlorophyll is the main optical pigment. There are other auxiliary pigments in chloroplasts. and this is:

Chlorophyll is a green dye. It is found in all light creatures. It is insoluble in water but soluble in organic solvents, such as carbon tetrachloride (CCl4), alcohol, etc.

There are many types of chlorophyll. They are chlorophyll a, b, c, d, e. These dyes are found in eukaryotic plants. Chlorophyll found in photosynthetic bacteria is called bacterial chlorophyll.

The structure of chlorophyll

They are flat, square, and light-absorbing parts. The head contains a complex porphyrin ring. The ring consists of four smaller continuous units (called the Phytol rings). Each ring of Phytol consists of carbon and nitrogen atoms. Magnesium atoms are in the center of the porphyrin ring.

The Mg atom is coordinated with nitrogen for each pyrrole ring. This is why magnesium deficiency can make plants yellow. The Haem group of hemoglobin is also a porphyrin ring. But its center is an iron atom, not magnesium.

It is a long and anchored part. It consists of a long hydrocarbon chain called Vitol (C20OH39). Plant alcohol is associated with one of the Phytol rings. The chlorophyll molecules are embedded in the hydrophobic heart of the thylakoid membrane through this tail.

Carotenoids are yellow, red to orange pigments. They strongly absorb wavelengths in the blue-violet range. Therefore, they absorb different wavelengths than chlorophyll. In this way, the spectrum of the absorbed light is increased. Therefore, it provides more energy for photosynthesis.

Some carotenoids protect chlorophyll from strong light. It absorbs and dissipates a lot of light energy and does not transfer this energy to chlorophyll. Similar carotenoids can protect the human eye.

Light is a form of energy. This is called energy or electromagnetic radiation. Light appears as waves and particles. Light particles are called photons. Visible light radiation of 380 to 750 nanometers in length is vital to life.

Chlorophyll absorbs the energy of sunlight. Converts this energy into chemical energy during photosynthesis. Chlorophyll cannot absorb all the light falling on its surface. The leaf surface absorbs only one percent of light energy. The remaining light is reflected or transmitted.

“The graph (graph) showing the absorption of light by vehicles at different wavelengths is called the absorption spectrum.” It shows that absorption is the maximum in the blue and red parts of the spectrum.

“The graph (graph) that shows the relative effectiveness of different wavelengths (colors) of photosynthesis is called the working spectrum.” The first work spectrum was obtained by the German biologist TW. In 1883 Engelmann (Engelmann). He is involved in spirulina research. Different pigments absorb different wavelengths.

The effect of different wavelengths also differs in different dyes. The spectrum of action can be measured in a simple way. Light the plants with light at different wavelengths (colors). Estimating the relative amount of spent carbon dioxide or oxygen released during photosynthesis at every wavelength. The working spectrum indicates that chlorophyll is a light pigment.