Here we discuss about Types of Tense Its examples. Universally, the time has got three divisions and consequently, there are three tense in English, Present, Past and Future. Each of these tenses is further sub-divided into four categories namely; Indefinite, Continuous, Perfect, and Perfect Continuous. We discuss them in detail.

Tense is that characteristic of verbs which indicates the time of the action or of the state of being that is described. In other words, by ‘Tense’ we understand the correspondence between the form of the verb and our concept of time. 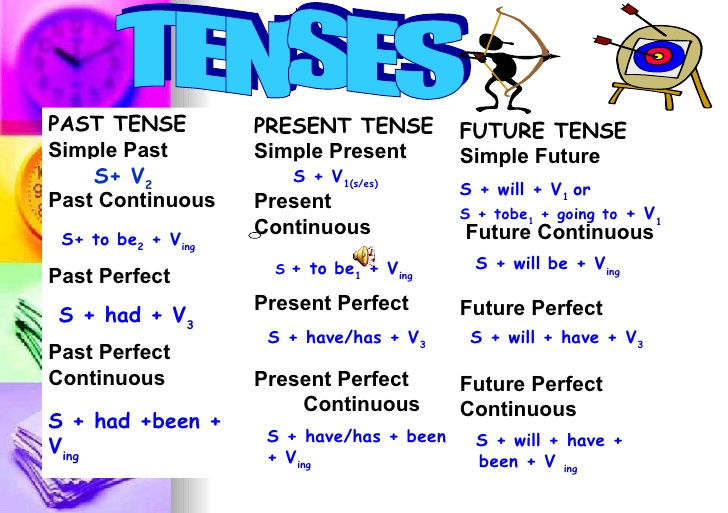 (ii) There she goes!

(i) He arrives here next month.

(ii) When does the college reopen?

Keats says, “A thing of beauty is a joy forever”.

(i) I shall wait till you finish your lunch.

(a) With the verbs of perception like see, Smell, or with verbs of appearing like the look, seem, appear etc.

(b) With verbs of emotions like love, hate, amuse, desire refuse etc.

(c) With a verb of thinking like suppose, agree etc.

(d) With verbs of possession like have, own, possess consist, contains etc.

(ii) This class is consisting of fifty students (Incorrect)

She is singing a song.

I am reading “War and Peace”.

My Uncle is arriving here tomorrow, tonight, the next day etc…

My dog is very silly; he is always running out into the road.

I have finished my work.

He has just gone out.

I have known him for a long time.

I have never known him to be angry.

Note: The indicator words used for present perfect are: just often, never, ever, so far till now, yet, already, since for, always But the same action with the indicator of past time like yesterday, in June, in 1990, at 4 O clock, last week/year in the morning etc. will be expressed in the simple past tens e.g.

(ii)He has always lived in this town. (Present Perfect)

(iv) She met me yesterday (Past Indefinite)

But Some Adverbials go with both Tenses

(i) She has been sleeping for five hours.

(ii) They have been playing since the 5’O clock.

I received a letter last week.

I did not sleep well.

She always carried an umbrella.

The time may or may not be mentioned e.g.

The Light went out while I was reading.

He was always grumbling.

(i)I had met him in Karachi.

(ii) I had seen him last time five years before.

I had finished my work when Ali comes to see me.

If he had gone, he would have caught the train.

It is used for an action that began before a certain point in the past and continued up to that time e.g.

At that time he had been writing a novel for two months.

It is used for an action that is still to take place e.g

I shall see him tomorrow.

Generally, this tense expresses pure and colourless future. When the future is coloured with intention, it is better to use ‘going’ to form reverse used of shall or will.

When I get home, my children will be playing.

I shall be staying there until Sunday.

It is used to indicate the completion of an action by a certain future time e.g

I shall have written me a book by the end of next month.

It presents an action being expressed in progress within a period of time that will end in somewhere in future e.g.

By next July, he will have been living there for four years.

What is Microscope Describe the Parts And Function