What is genetic testing: Describe Its Types 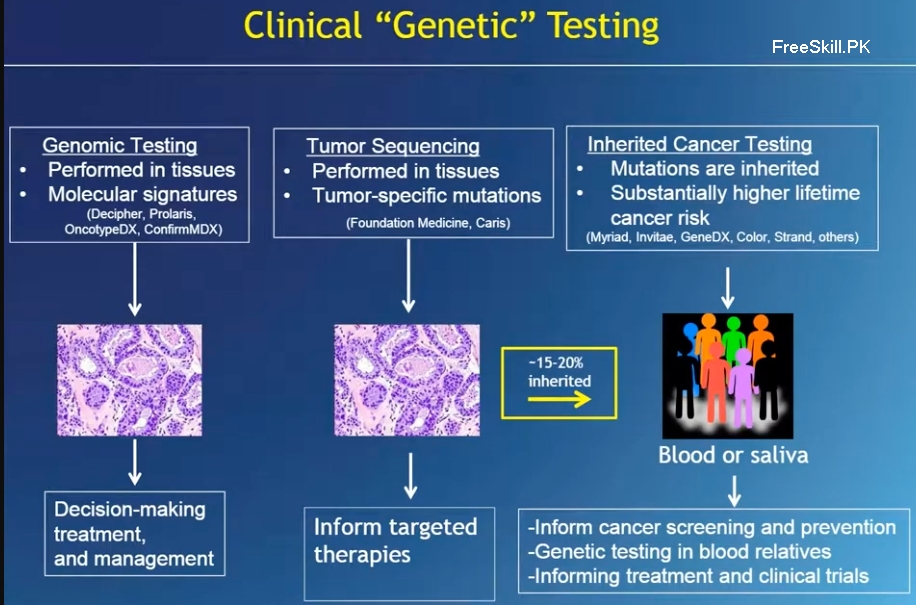 What is genetic testing: Describe Its Types

Genetic testing helps doctors find genes that can help an individual or their partner or child find out about a medical condition. This genetic test is done by taking a small sample of blood or body to determine what is currently going on inside the body.

For genetic tests before birth, blood tests can screen pregnant women diseases. To check for other diseases, or if screening blood tests may be a problem, doctors may recommend amniocentesis or chorionic villus sampling:

Newborn screening immediately after birth is used to identify genetic diseases that can be treated early in life. In the United States, millions of infants are screened every year. Currently, all states test infants for phenylketonuria (a genetic disease that can cause intellectual disability if untreated) and congenital hypothyroidism (thyroid disease). Most states also test for other genetic diseases.

Diagnostic tests are used to identify or rule out specific genetic or chromosomal diseases. In many cases, if a specific disease is suspected based on physical signs and symptoms, a genetic test can be used to confirm the diagnosis. Diagnostic tests can be done before birth or at any time in a person’s life, but they do not apply to all genes or all genetic conditions. The results of clinical trials can affect an individual’s choice in health and disease management.

Prenatal testing is used to detect changes in the fetus’ genes or chromosomes before birth. If the infant is at increased risk of genetic or chromosomal diseases, such tests may be performed during pregnancy. In some cases, prenatal tests may reduce the couple’s uncertainty or help them decide pregnancy. However, it cannot identify all possible genetic diseases and birth defects.

Preimplantation testing, also known as preimplantation genetic diagnosis (PGD), is a specialized technique that can reduce the risk of having a child with a specific genetic or chromosomal disease. It is used to detect genetic changes in embryos born using assisted reproductive technology (eg in vitro fertilization). In vitro fertilization involves removing egg cells from a woman’s ovaries and fertilizing egg cells with sperm cells in vitro. For pre-implantation testing, a small number of cells are taken from these embryos and tested for some genetic changes. Without these changes only the fetus is implanted in the uterus to initiate pregnancy.

Predictions and pre-determined tests are used to detect genetic mutations associated with diseases occurring after birth, which usually occur later in life. These tests are helpful for family members who have genetic diseases but who do not have any symptoms of the disease at the time of testing. Predictive tests can identify some mutations that increase the risk of diseases with a genetic basis (such as some types of cancer). Pre-symptomatic examination can determine whether a person will develop genetic symptoms, such as hereditary hemochromatosis (iron overload disease), before any signs or symptoms appear. The results of prognosis and pre-symptomatic tests can provide information about the risk of a particular disease to a person and help in making medical decisions.

Forensic testing uses DNA sequences to identify individuals for legal purposes. Unlike the above tests, forensic tests are not used to detect genetic mutations associated with diseases. These types of tests can identify victims of crime or disasters, exclude or involve criminal suspects, or establish biological relationships between people (for example, parent-child relations).